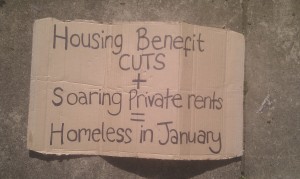 By Let Down (a campaign led by London Renters)

We applaud the work charities like Shelter and Crisis do with homeless families. But we’re disappointed to see them colluding with the local and national government policy to re-house homeless people in the PRS. Shelter need only look to their own research to see why they should be openly opposing this approach.

The event today is aimed at local authorities and other practitioners. But they’re the wrong people to talk to. Since 2010, the government has increased the sell-off of social housing through Right to Buy and passed the Localism Act 2011 which means that councils no longer need to find social housing for homeless families, but instead can palm them off in the PRS where they face rip-off rents, poor housing, insecurity and exploitation. Rather than legitimising this approach and discussing with over-stretched and cash-strapped councils how to make the best of a bad job when people are forced into the PRS, Shelter and Crisis should be demanding a national change of approach to housing.

The interim findings from Shelter and Crisis’ three-year research project into homeless families document the unreasonable demands made by many landlords, not to mention the insecurity of knowing they could be evicted for no reason at any time. Staggeringly, for some families, eviction notices have been served as part of their contract.

The report shows families are living in inadequate housing which lacks proper cooking facilities. Some families are being forced to share beds. For others, renters feel unable to report repairs because of hefty call out charges or the very real fear they’d be branded a trouble maker and evicted. In a number of cases, renters had done considerable work on their homes at their own expense to avoid bothering the landlord. This is not surprising; existing research shows that, compared to wealthier renters, those on lower incomes are twice as likely not to take action about a problem with their landlord for fear of the consequences.

Families interviewed by Shelter had spent up to seven months searching for a property they were able to rent, and some had had to move miles from their children’s school. In one case, a parent was spending an hour and 40 minutes taking their child to school each day, and another was travelling 15 miles.

Other research reveals how poorly regulated, insecure private rented housing is part of the reason people become homeless in the first place: Government statistics show that for households becoming homeless, in over one in four cases this was due to their standard private tenancy ending – up from one in nine in 2009. That doesn’t include others mentioned in the research such as the family who were served an eviction notice after complaining to the council about the landlord’s failure to do repairs to address their appalling living conditions.

The description of the project on Shelter’s website states “We expect that the private rented sector will increasingly become a tenure of choice in which to house people.” But let’s be clear: as for the vast majority of renters we speak to, the PRS is not where homeless families want to live. Statistics show that the PRS is more expensive, poorer quality and less secure than other types of housing. Most of us are here because we have no other choice – it’s a good option when the only alternatives are temporary accommodation, rough sleeping or, as one participant in the study said, “living in a tent”.

For the wellbeing of homeless families, wider society and the public purse it’s obvious we need far more social housing, which is cheaper, better quality and provides people with the security they need to recover from the trauma of being homeless. We also need proper regulation to protect those who continue to rent  from extortionate rents, poor quality housing and chronic insecurity.

These are the things we were demanding at our recent housewarming protest against high rents and government subsidies for luxury private rented flats, just a few hundred meters from where the Shelter event is being held in Stratford. Meanwhile, the same issues are being faced by residents on the neighbouring Carpenters Estate which is threatened with redevelopment plans. It’s clear that the sooner we unite in demanding real change, the sooner it’ll happen.

Look around this site for...